When I think of jellyfish (phylum Cnidaria), I typically think of the ocean. What I don’t think of is lakes. On that note, Ongeim’l Tketau in Palau (aka “Jellyfish Lake”) serves as a reminder of our biosphere’s affinity for the unusual.

Jellyfish Lake is a marine lake; one of more than 50 saltwater basins in Palau that formed between 5,000 – 15,000 years ago during a period of rising sea levels. As the ocean overtook the beaches and moved inland, a number of Papuan jellyfish (Mastigias papua) moved into at least 5 of these lakes. When the ocean eventually receded, these jellyfish were trapped in the lakes and established what are now isolated populations. 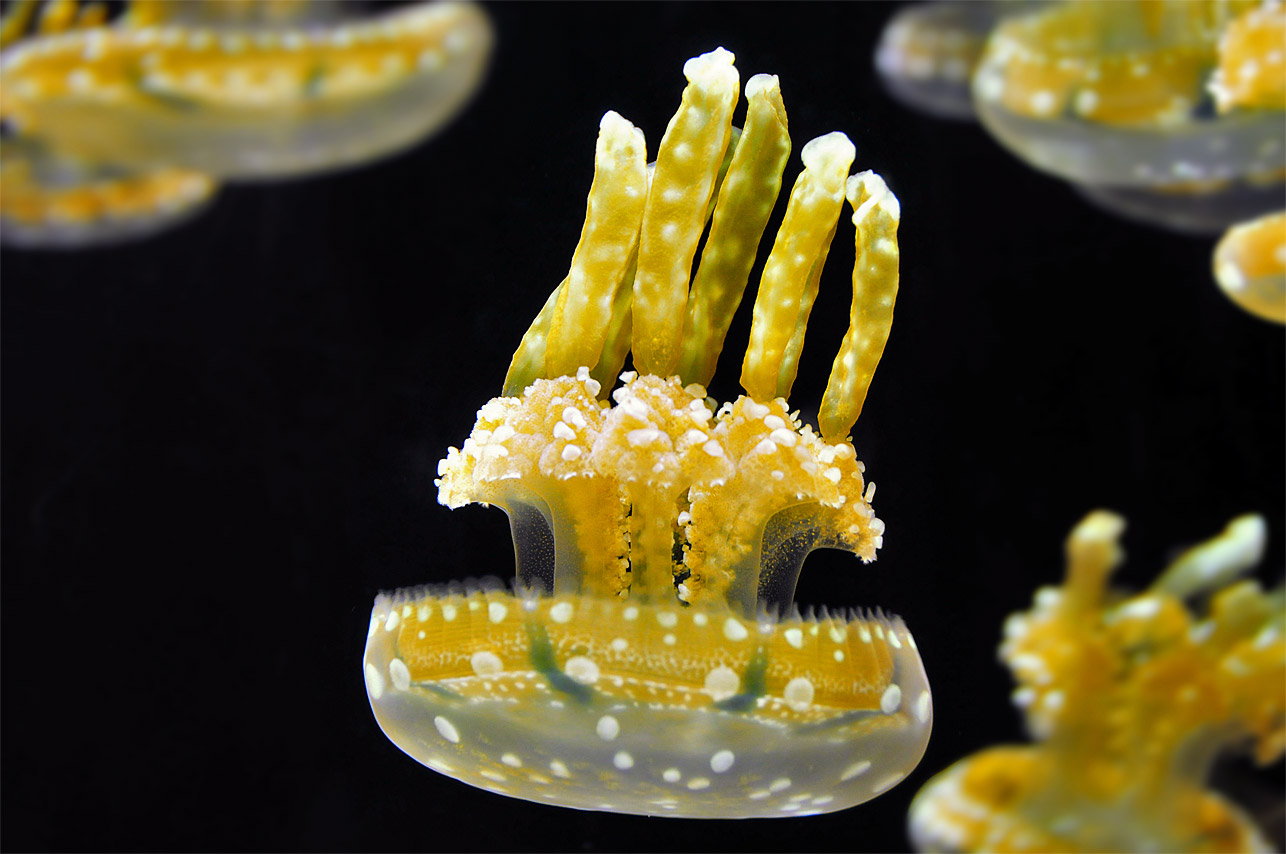 Though all of these lakes retain at least some degree of communication with the ocean via networks of limestone tunnels, the isolation is sufficient enough to allow each of the 5 lakes to develop its own unique Mastigias papua subspecies. Each one of these species has been named after 5 elected Presidents of Palau.

A Daily Shuffle With the Sun

Of all these lakes, Ongeim’l Tketau is unequivocally the most famous. It is home to over 10 million golden jellyfish (Mastigias papua etpisoni) that engage in a conspicuous daily migration in response to the movement of the sun.

Every morning, the “smack” (def: group of jellyfish) moves eastward toward the rising sun. In the afternoon, they turns westward. Why engage in this ~1 km daily shuffle?

The first reason is nutrition. Like their ocean lagoon ancestors, the lake jellyfish meet part of their daily energy needs from the activity of photosynthetic endosymbionts called Zooxanthellae.

These unicellular algal protists live within the jellyfishes’ tissues and produce glucose, glycerol, and amino acids. Those materials are, in turn, used by the jellyfish in a way similar to coral.  Incidentally, the rest of the jellyfishes’ nutrition comes from feeding on zooplankton within the lake.

By maximizing their exposure sunlight, the jellyfish boost the photosynthetic productivity of their Zooxanthellae and subsequently increase their own energy gains.

The second reason for the migration is presumably to avoid the walls of the lake.

Attached to the walls is a patchwork of stark white sea anemones (Entacmea medusivora) with a penchant for devouring jellyfish much larger than themselves.

By moving eastward in the morning and westward in the afternoon, the jellyfish swarm ensures that it will always encounter a shadow before contacting the wall and becoming a meal for a hungry anemone.

This presumption is supported by the fact that these jellyfish respond to shadows dramatically that they will typically form a dense curtain right along the illuminated edge of a patch of darkness, almost as though they struck an invisible wall.

Diving with the Jellyfish

Simply observing the jellyfish from above can be spectacular in its own right, but if you’re looking for a more personal encounter, Ongeim’l Tketau provides visitors with an opportunity to dive right into dense gelatinous flock.

Donning snorkels, masks, and fins, visitors can swim in what has been described by the World Wildlife Foundation as “a living lava lamp.”

While the lake jellyfish have changed a great deal in relation to their lagoon ancestors, they still retained their ability to sting. Fortunately for snorkelers, the sting is very mild and barely detectable by human skin. Visitors often report only a slight tingling sensation near their lips, making for an absolutely surreal encounter in what is arguably one of the most unusual places on the planet.